Sunday 9th May is Europe Day! Organised by the EU to mark the anniversary of the foundation of the European Union, Europe Day is also the perfect occasion to highlight emerging European musical talent. Two events will take place on Sunday: Music Europe Day organised by Europavox, and Europe Day courtesy of Liveurope & EBU. 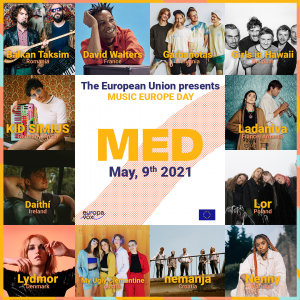 On 9th May  2020, Music Europe Day – MED was born to replace the physical version of the Fête de l’Europe which had been rendered impossible by the pandemic. The first edition was watched by almost 600,000 people.

After months of difficulties, doubts and also hope, the desire to return to life – and live music – is stronger than ever. But even during this forced exile from the stage, creativity has prospered throughout Europe. 15 acts from 15 different European countries will be providing a cross-section of the talent, style and verve on offer. On Europe Day, from 7pm CEST until midnight, they will be demonstrating, via internet, their uniqueness, diversity, their unique approaches to mixing tradition with the modernity.

For the second edition of Music Europe Day, they have chose life, and live music: away from the rooms and studios in which they’ve been isolated, this year they will be presenting their music in short concerts filmed outside. The locations are symbols of the diversity of our common, public spaces: rooftops of capital cities or village squares, clearings in forests or beaches on the coast. The artists are inspirational too, giving personal, humorous interviews about their passion for music and their hopes for the future of Europe.

Among the 15 artists, David Walters will be representing France, and Franco-Arménien Ladaniva, who are signed with French live agency Dionysiac Tour, will also be performing. 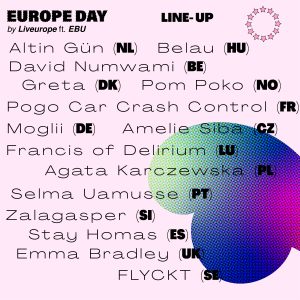 For the seventh consecutive year, Liveurope will be celebrating Europe Day by doing what it does best: shedding a light on new European talent. This year they are also being supported by public radio stations around Europe to reach an even bigger audience.

All 15  of the Liveurope sites around Europe have recorded an exclusive mini-showcase with a promising local artist, relayed by European radio stations commencing from the week of Europe Day. Some of the radio stations will also be broadcasting special programmes that go into greater depth and feature interviews with some of the artists.

All the performances will be viewable on Liveeurope’s Europe Day website from 9th May.

Yelli-Yelli | Taking a trip to India with ‘La Violence Est Mécanique’ Born in the Parisian suburbs, Yelli Yelli, who has Kabyle and Czech origins, will soon be in India to promote her latest album La Violence Est Méca...
Show filters