Since its creation in 2004, Nø Førmat! has evolved according to the principle of welcoming, without stylistic constraint, a variety of musical forms that reflect the wealth of our increasingly creolised and interrelated world.

To celebrate its 15th birthday, Nø Førmat! has dreamed up an itinerant festival featuring, in five exceptional events on three continents, some of the major names from its catalogue : Oumou Sangaré, Mélissa Laveaux, Vincent Segal, Blick Bassy…

It’ll be another way of affirming that music is an universal language that offers human beings the chance to get each other, over and above their differences. 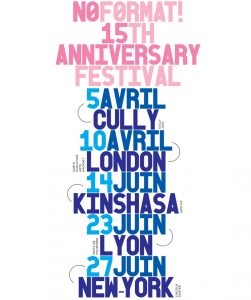