Every year at the end of June, the French Embassy in Spain and the Institut Français in Madrid organise the Fiesta de la Música Verde around the summer solstice. The cultural event, which began in 1982, celebrates professional as well as amateur and emerging artists, and is open to all styles of music. This year, the Institut Français in Madrid is kicking off the summer with the slogan ‘a (living) planet’, and has announced performances on 24th June from DJ duo S:lin! and French collective Musique d’Apéritif, in collaboration with ecological foundation Bye Bye Plastic. 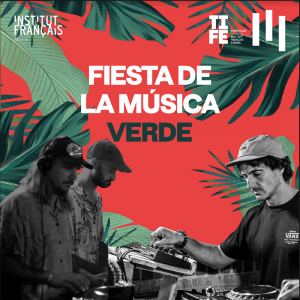 S:lin! is the fruit of a collaboration between Diego alias -Slin- et David alias -VKG-, who met in Madrid in 2011 at a crossfit session. Eight years later, in 2019, they installed their first studio in Diego’s house where they started creating what they would later call ‘flip flop techno’. Together they developed the style which draws on cool techno, warm house, touches of afro music and elements of Caribbean music.

Three of the artists from the Musique d’Apéritif collective will be present on Thursday night at the Fiesta de la Música Verde. Formed in Biarritz in 2013, Musique d’Apéritif’s music is an ode to joy that creates a relaxed atmosphere to savour with family, with friends, at sunset, midday or midnight. Musique d’Apéritif is about friendship, excitement, sharing and partying.

Rendez-vous in the cafétéria and the courtyard of l’Institut Français de Madrid on 24th June to enjoy the Fiesta de la Música Verde.

For more info, visit the Facebook page of the l’Institut Français de Madrid.