What the France, Bandsintown, and Sacem are joining forces for a special edition of the Fête de la Musique on 21st June to showcase the richness and diversity of the French scene for an international audience. AYỌ, Kungs, Kiddy Smile,Yelle, Talisco or Catastrophe are among the artists performing at live.bandsintown.com with about twenty made-in-France artists from all genres – jazz, soul, pop, house, and hip-hop…

The Fête de la Musique was born in France but has become popular in countries around the world. On the 21st June 1982, musicians descended on the streets of Paris to play for the first Fête de la Musique. The event, often called the ‘Journée de la musique’ (day of music) has since become a global tradition and is celebrated in some form in 120 countries, where artists at various levels and styles transform public spaces into music venues. This joyous, democratic spirit of coming together to make or enjoy live music has remained intact, even though live music is currently facing an unprecedented challenge. 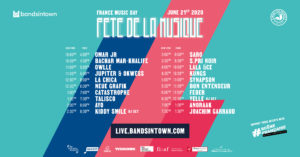 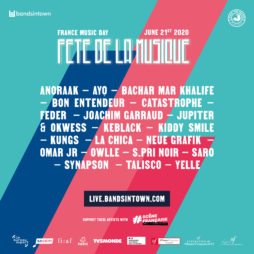