November Ultra | Interview and exclusive playlist for What The France!

Franco-Spanish pop singer November Ultra opens up in an interview with What The France. In the video she talks about her album Bedroom Walls, her forthcoming projects and the single, ‘Soft & Tender’, that changed everything for her.

Bedroom Walls is a unique pop album which is the fruit of a life lived fully. Gentle and intimate, it feels like an invitation to take refuge with November Ultra in the Parisian bedroom she has created.

It’s title is a reference to the place where messages from friends have been scribbled on the walls and where books, objects and presents are scattered around. It’s the place where November Ultra can be herself, without a filter and with the utmost sincerity, with time to think about her feelings and experiences as well as about the person she is becoming as she moves from teenage years to adulthood

Having grown up in France with Spanish and Portuguese parents, November Ultra has spoken three languages since the age of six – English, French and Spanish – which are all present on the album Bedroom Walls, each one symbolising something different. 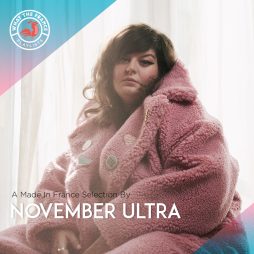 A Made In France Selection By November Ultra